60 minutes to escape. Can you make it out in time?

60 minutes to escape the game

Work together to solve the puzzles 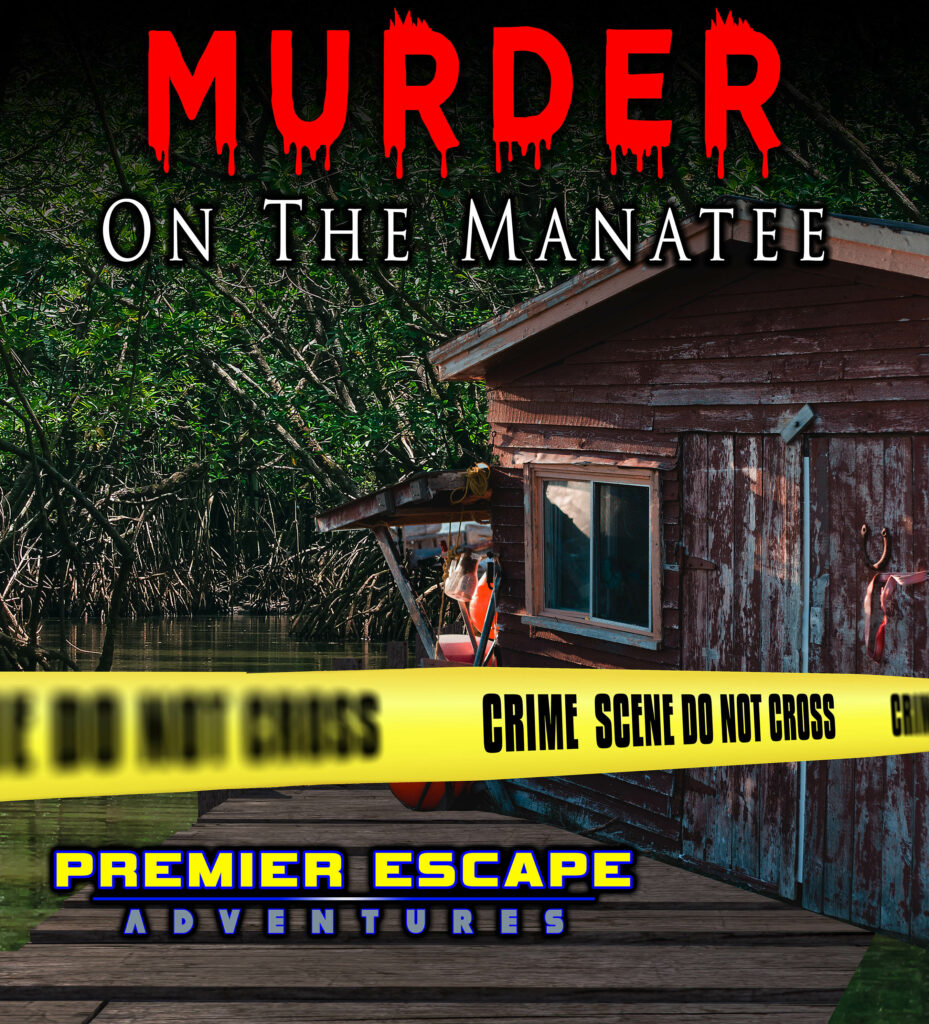 Murder On The Manatee

Quick! Earl’s body has been missing for quite some time! You and your friends were telling stories by the campfire while camping along the Manatee River when Earl came up in conversation. You are told there is an abandoned hunting cabin just along the river that may help you to find the truth. Can you and your friends break into the cabin, solve the puzzles and find out what happened to Earl? You only have one hour because the sheriff checks the cabin regularly for anyone snooping around. Good luck, you’re gonna need it!

The great Pharoah upon his death left behind 3 gems and guaranteed the people of the land to never have to worry about survival as long as the gems stayed in place, otherwise, the curse would be activated. Thieves have disrupted his chambers triggering the curse wrecking havoc on the lands. The gems need to be placed back to the Pharaoh's final resting place before civilization is lost. You have 60 minutes to enter the tomb, find the gems, return them & GET OUT or you too will perish. Many have tried, all have failed. Do you have what it takes to BREAK THE CURSE?
Now Escaping
BOOK

You are on a date and see an open row of great seats! Unbeknownst to you, these happen to be the ambassador’s seats. The ambassador was the main target of an abduction but you’re the one being targeted now! During intermission, you are taken by several large men in fancy suits, sharp ties, and stunning shades. They pull you into a town car. They place a cloth over your mouth and nose. You wake up, handcuffed to your date. Boy, oh boy, are you in trouble. You must find the key to your handcuffs to escape before the kidnappers return in 60 minutes.
Now Escaping
BOOK

Harry Houdini was noted as the world’s greatest magician and for his sensational escape acts of all time. Sometime before his escape, he told his beloved wife, Bess, that his journal with all the secrets to his stunts has been hidden in his study and that only the next greatest will be able to discover it. In order to be the next great, you will have to solve a series of puzzles using clues, hints, and strategy to find the hidden “Book of Secrets”. However, if you fail, you’ll become the next greatest disappearing act ever performed. You and your team have 60 minutes to find Houdini’s Book of Secrets.
now escaping
BOOK

Crisis at the North Pole

Crisis at the North Pole Christmas is fast approaching and there’s trouble at the North Pole. Santa’s list has gone missing. Santa and The Elves have been looking everywhere to find it but have had no luck. Everyone has been working hard at the North Pole all year. The Elves have been busy making toys, the reindeer practicing their flight routes, and even Santa’s been checking and rechecking his List but now the list has gone missing. How will Christmas go on? You and your team will need to investigate to find Santa’s list. He needs YOU! Do you have what it takes to help save Christmas?
now escaping
BOOK

our customers are the best

I tried the Date Night Disaster room with my boyfriend and it was so fun! It was challenging but not to the point where we couldn’t figure it out. The staff are also such wonderful people. I NEVER write reviews but this place deserves the best review. Definitely going to be coming back to try all they rooms they offer!
Alexis A.
We were a group of 6 "seniors" who had never been to an escape room. We did the Houdini-Book of Secrets room. The clues were clever and challenging but the owners were there with helpful hints strategically timed to help us along. This was a wonderful hour and would be good for all ages including children.
Larry E.
The escape room experience was planned as team building experience to foster creative thinking and better communication. It was so much more than that. We had a blast! We will definitely be back!
Michelle D.
We did the Date Night Disaster room and we had a blast! The puzzles were creative and flowed well with the room theme. We can’t wait to go back and try the other rooms. The owners were so nice and we were able to speak with them and share our escape room experiences. I definitely recommend this place!
Brittney A.
Our family went to Premier Escape Adventures for something to do on a cloudy day. It was a great decision! We had a blast searching for Houdini’s Book of Secrets. We’ve done a few escape rooms and this one is top notch. Your teenagers won’t be disappointed.
Sandy B.
Previous
Next

We won't spam you, promise.

Loved by these corporate companies