The History of Escape Rooms – What You Need to Know

Escape rooms are popping out in many cities. They are fun and deliver a great bonding experience for family and friends. But where did they begin?

The Labyrinth is a maze built by Daedalus for King Minos of Crete at Knossos to keep the Minotaur imprisoned. It was so complicated that even the builder was lucky to find his way out. Theseus also navigated his way through the maze of a labyrinth to kill the Minotaur.

Images of the Labyrinth can be found on Greek coins from as early as 4:30 BC.

The traditional role of a maze is to trap evil spirits, and religious pilgrims would walk through its paths reciting their prayers.

In the 16th century, creating mazes from hedgerows became popular among the aristocracy of Europe. The most famous maze structure is the Hampton Court Maze. However, there are no religious connotations to these, and they are only there to create games.

That’s why mazes are featured in many works of literature and across pop culture.

The Online Origins of the Escape Room

Before, virtual players were locked in an online room, and they were tasked to try and uncover virtual clues to escape. In the 1980s, the games were popular with gamers. One of the earliest examples was John Wilson’s Behind Closed Doors, which came out in 1988.

The game is text-based, and then the escape room genre has come a long way. After the game, it was followed by Mystery of Time and Space (MOTAS).

Eventually, the online escape room genre merged with the real-world escape room concept. An escape room is a physical space locked from the outside and containing a number of challenges or puzzles that must be solved or bypassed to escape.

For collectibles, players usually need hidden clues or objects to discover. And for the digital versions, there are usually a series of clues or anagrams to solve. Players typically have 60 minutes to escape from the room.

Most of the escape rooms have themes. They can be school rooms, dungeons, hospitals, stations and even underwater caves. The themes are very comprehensive, and some have up to one hundred puzzles.

While the majority of escape rooms can be done solo, they are often played in groups with teams of two to five people. Teams are often strangers and are not allowed to communicate with each other during the game. They can, however, use the hints given by the game master.

Escape rooms have come a long way. They are no longer part of the online virtual world. They are now immersive and can be enjoyed by everyone.

The evolution of escape rooms is not yet over. Escape rooms are now more realistic than ever. In the future, we might be led through a whole world exploring all the things our brains can think of. Whether it is a locked room, a secret passage or a series of puzzles, escape rooms are sure to keep us guessing.

Are you looking for things to do in Florida? Premier Escape Adventures is Bradenton’s new and most exciting activity for all ages and skill sets. We are the latest escape room in Sarasota and virtual reality facility full of interactive, live-action, fully immersive escape, and combine your wits as you race against the clock.

Level Up Your Work Team Communication with Escape Rooms

Escape rooms have become a popular team-building activity in recent years. And for good reason – they’re a great way to promote communication and collaboration 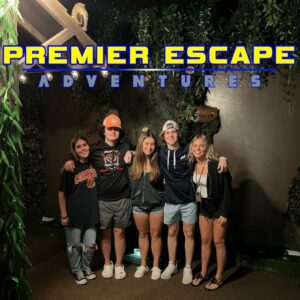 Why Escape Rooms are the Ultimate Kids Party Entertainment 

Escape rooms are all the rage these days, and it’s no wonder why. They’re thrilling, challenging, and a whole lot of fun. But did you

Adventure Central – The Benefits of Playing in an Escape Room

In one of the episodes of Phineas and Ferb in Season 3, the brothers created an escape room but struggled to get out. It was